MENU
0
Can I put Cytotec under the tongue?

Can I put Cytotec under the tongue?

The body is able to absorve Misoprostol (Cytotec – 200mcg) through five different ways:

When it comes to their efficacy, all methods differ . However, when the tablets are introduced into the vagina, it can take up to 4 days for them to dissolve completely.

With that being said, putting Cytotec under the tongue is the safest way to have a medical abortion.

This way, no remains of the pills will be found if the woman needs to get medical help.

There are no blood tests that can detect Misoprostol (Cytotec – 200mcg), and therefore they can’t prove that a woman tried to get an abortion.

In countries where women can be criminalized or prosecuted for having an abortion, you don’t have to say you tried to induce an abortion. Instead, said you THINK you have suffered a miscarriage. The doctor CAN’T notice the difference.

After using medications, we suggest waiting at least 72 hours to get a better view of how it develops the abortion procedure.

When used sublingually (under the tongue), Misoprostol (Cytotec – 200mcg) has an efficacy rate of 95% , and of 93% when used vaginally. 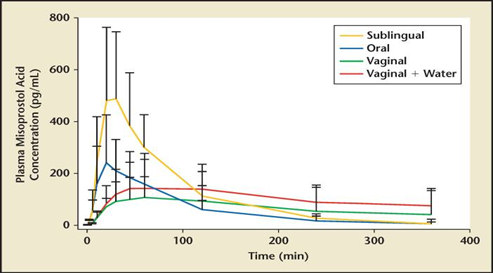 The rectal route of administration shows a similar pattern to the vaginal administration, however, it has a lower AUC, including a significantly reduced concentration than the maximum peak.

If you rather introduce the pills into the vagina, then you should use your fingers to push them as far as possible, deep inside right where the uterus begins.

If you experience any complication and happen to live in a country where health care professionals can report you to the police, then pay attention: with your fingers you should carefully check your vagina and confirm that the pills have dissolved completely. Remove all loose pills and find a hospital immediately. It usually takes 4 days for the pills to dissolve completely.

We do not recommend the vaginal use. We strongly advise you to take Cytotec under your tongue.

The last comment and 13 other comment(s) need to be approved.
0 replies

Want to join the discussion?
Feel free to contribute!

This site uses cookies. By continuing to browse the site, you are agreeing to our use of cookies.

We may request cookies to be set on your device. We use cookies to let us know when you visit our websites, how you interact with us, to enrich your user experience, and to customize your relationship with our website.

Click on the different category headings to find out more. You can also change some of your preferences. Note that blocking some types of cookies may impact your experience on our websites and the services we are able to offer.

These cookies are strictly necessary to provide you with services available through our website and to use some of its features.

Because these cookies are strictly necessary to deliver the website, you cannot refuse them without impacting how our site functions. You can block or delete them by changing your browser settings and force blocking all cookies on this website.

We also use different external services like Google Webfonts, Google Maps and external Video providers. Since these providers may collect personal data like your IP address we allow you to block them here. Please be aware that this might heavily reduce the functionality and appearance of our site. Changes will take effect once you reload the page.